Sorry for not posting for a few days, we have been out of contact with the world for a few blissful days…

So now the adventure really starts… After a healthy brekfast we met our driver Made for our trip to Medewi. The traffic in Kuta is chokka, so it takes soooo long to get out of the city. Then when you’re finally free of city traffic you hit a one lane (two way) road which is the main road for the whole of the west coast! So basically you travel at the speed of the slowest truck… Unless you overtake… Which everyone does at crazy times, you kinda just have to trust you’re gonna be ok!

We did a little detour enroute to Tanah Lot which is beautiful temple set on rocks in the ocean. It was heavily packed with tourists but you could still appreciate the beauty of it all. Plus there were some very fortunate surfers catching waves between the two temple rocks.

Up in a little cafe beside the temples, there were there little animals of which I don’t know what they are and a huge fruit bat! It was just hanging there happily cleaning its wings. None of the animals were chained up which I was thankful for. 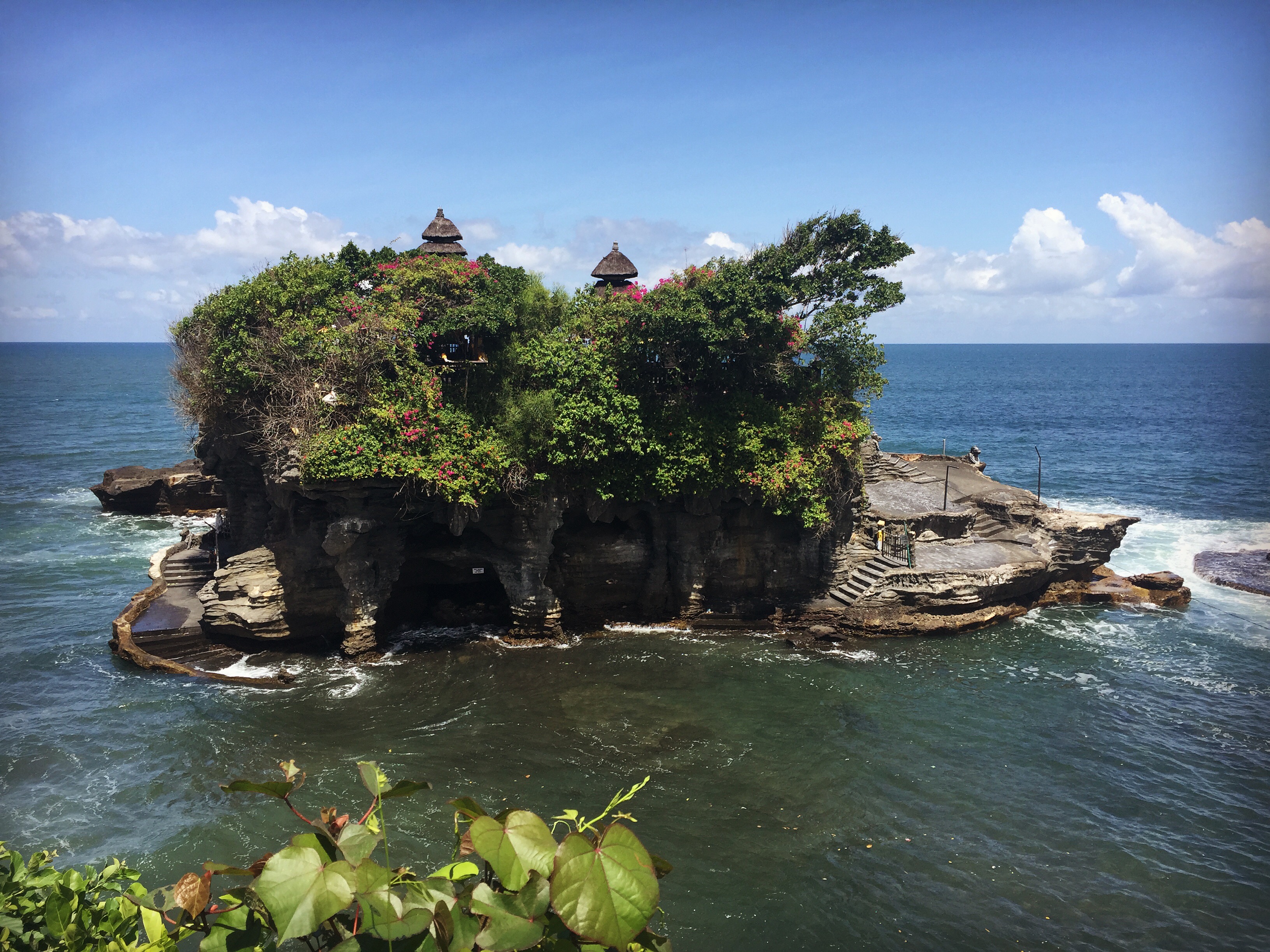 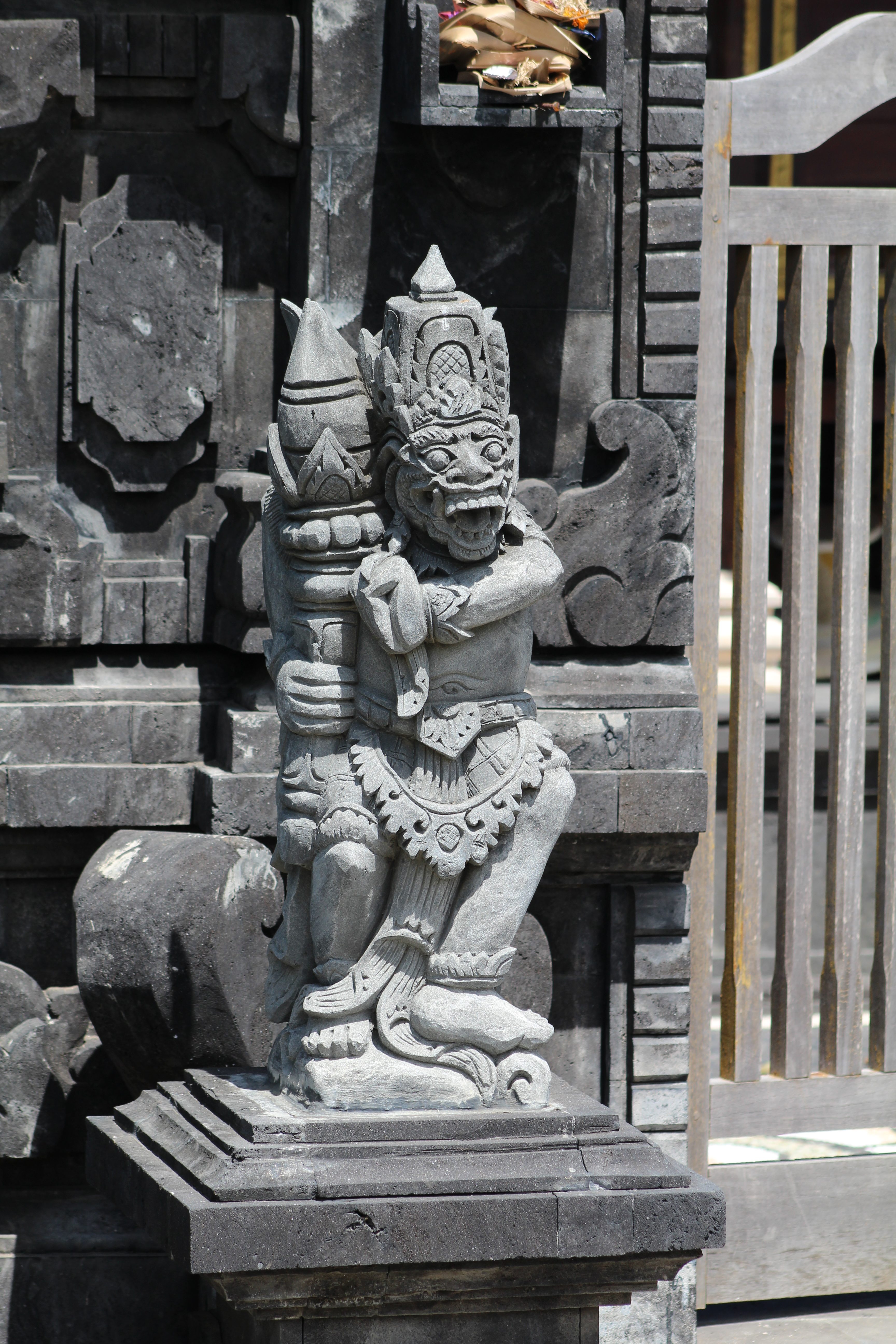 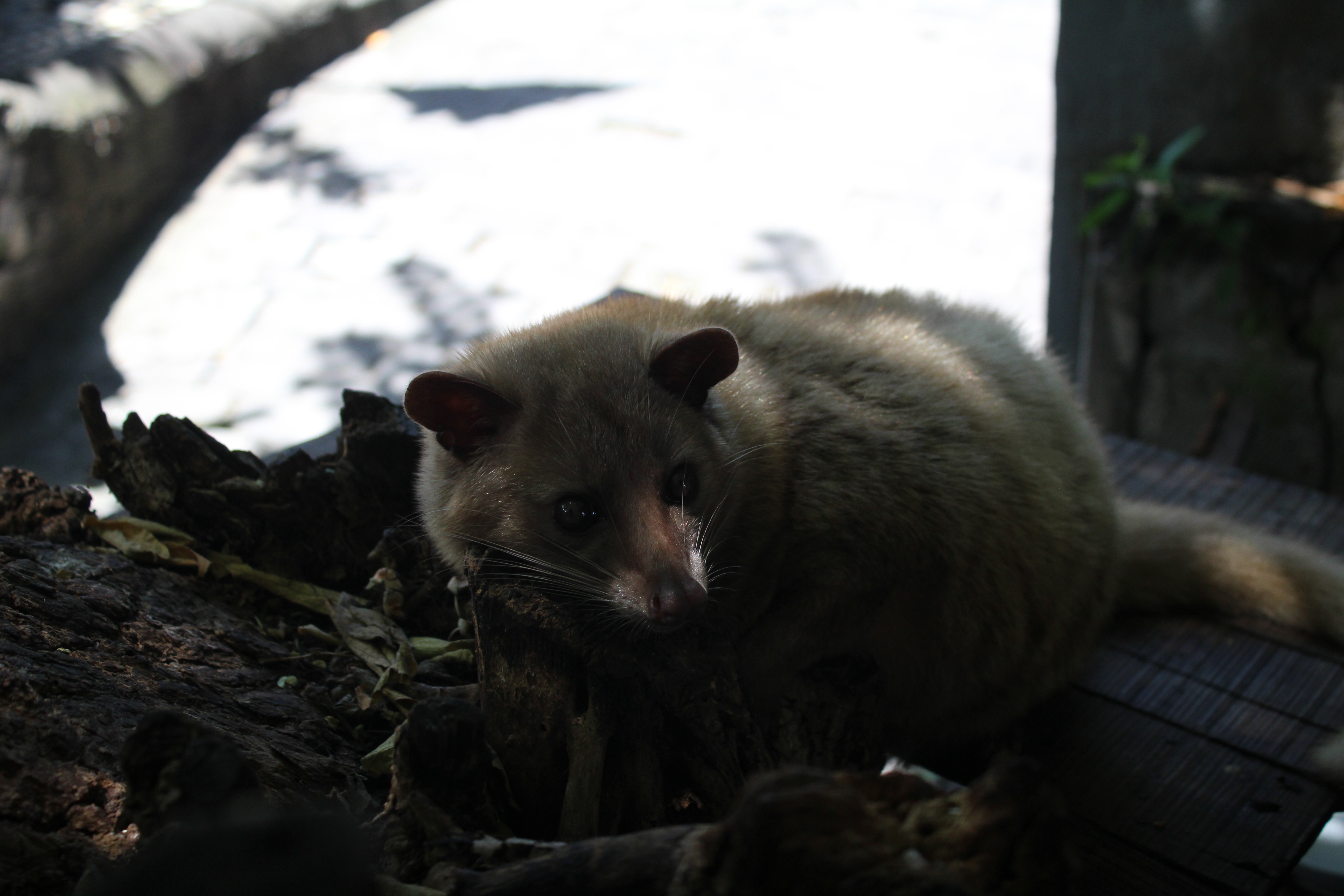 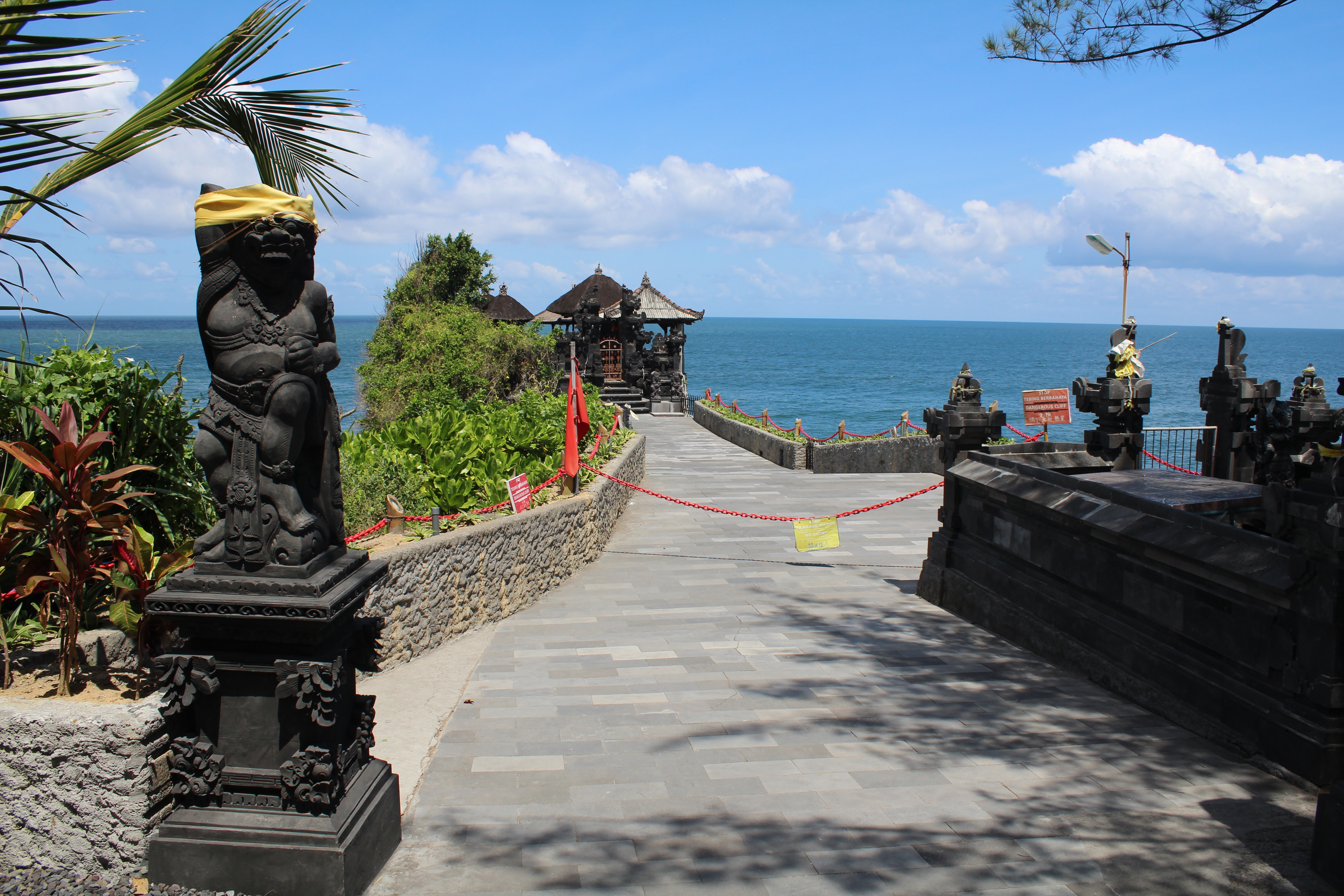 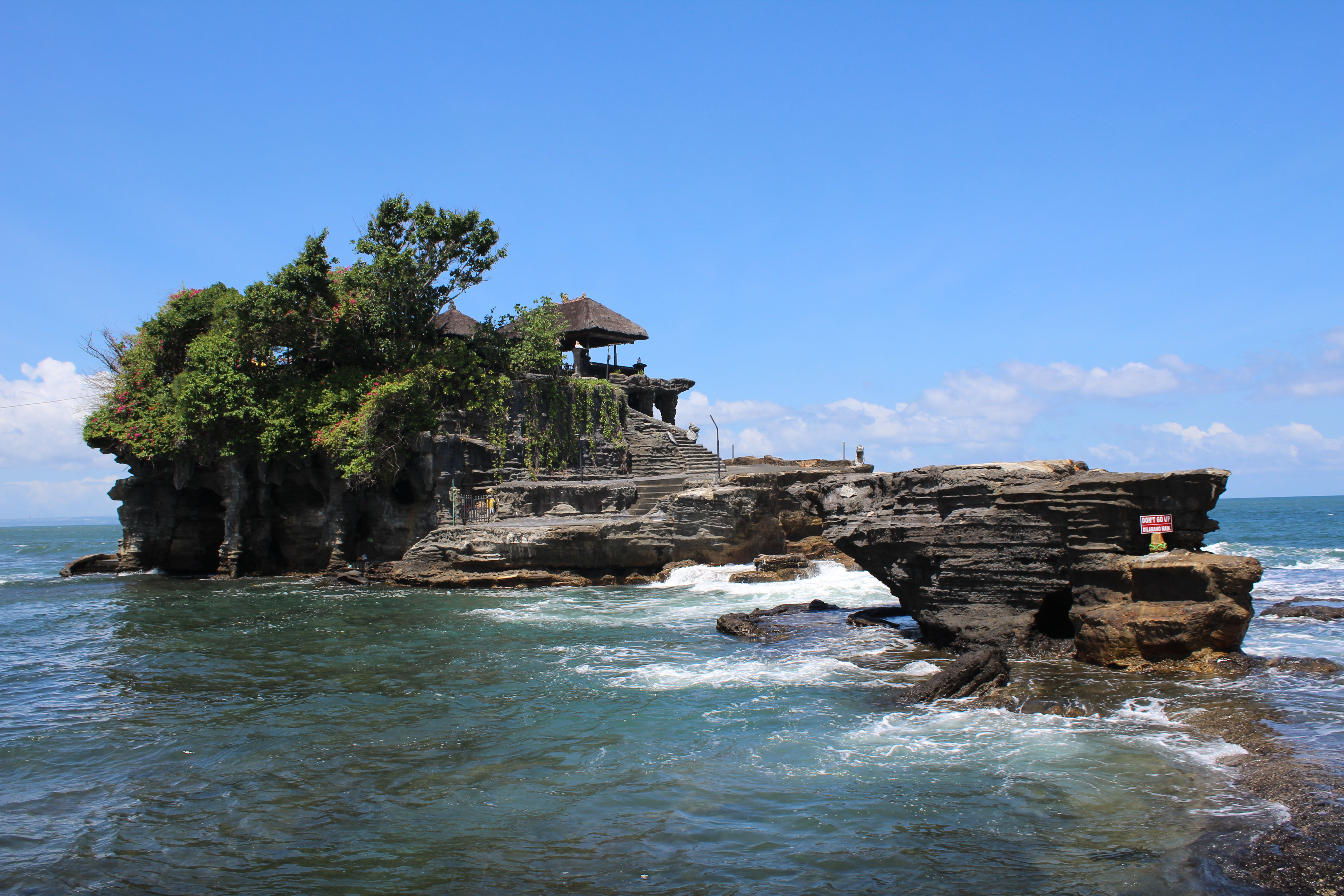 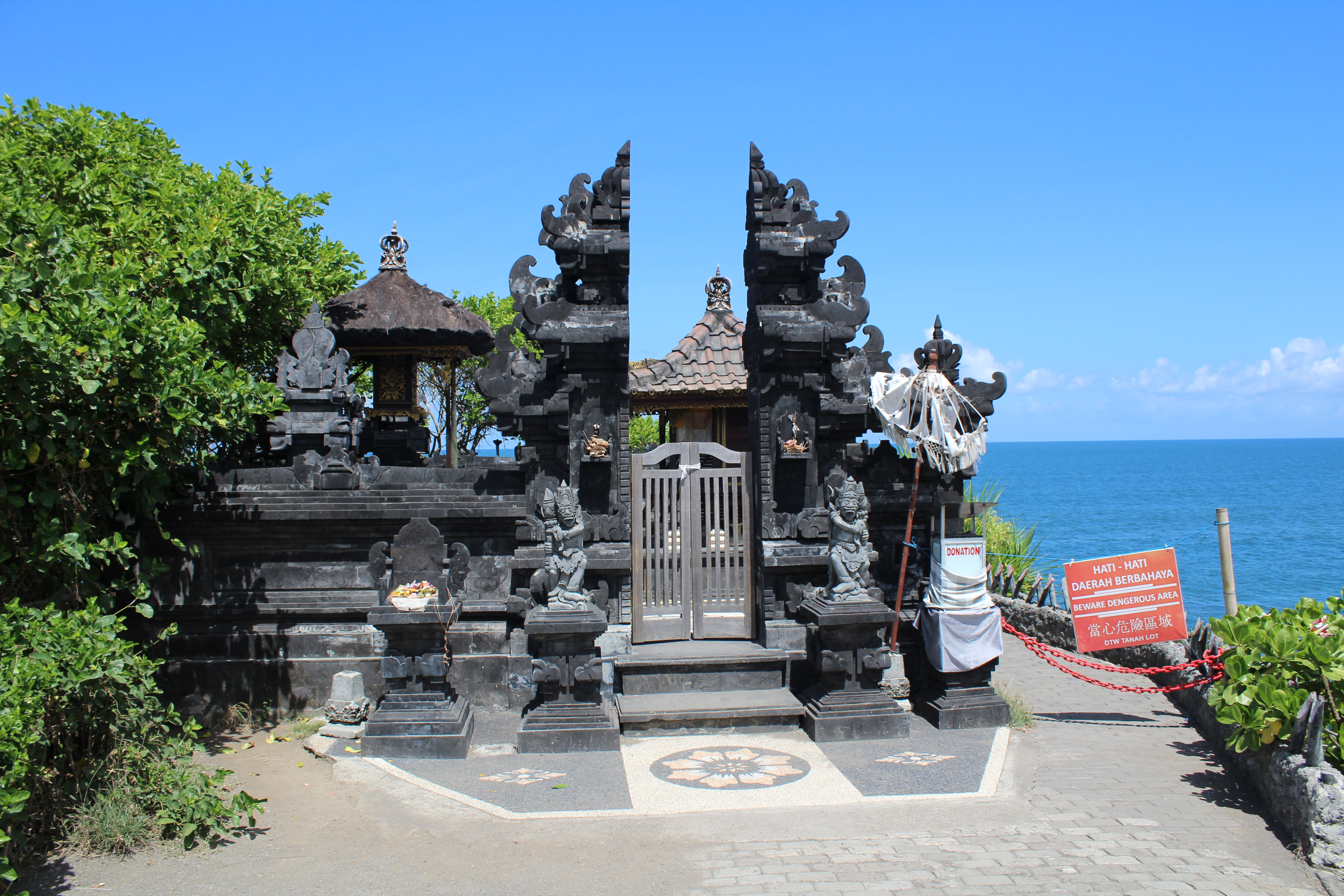 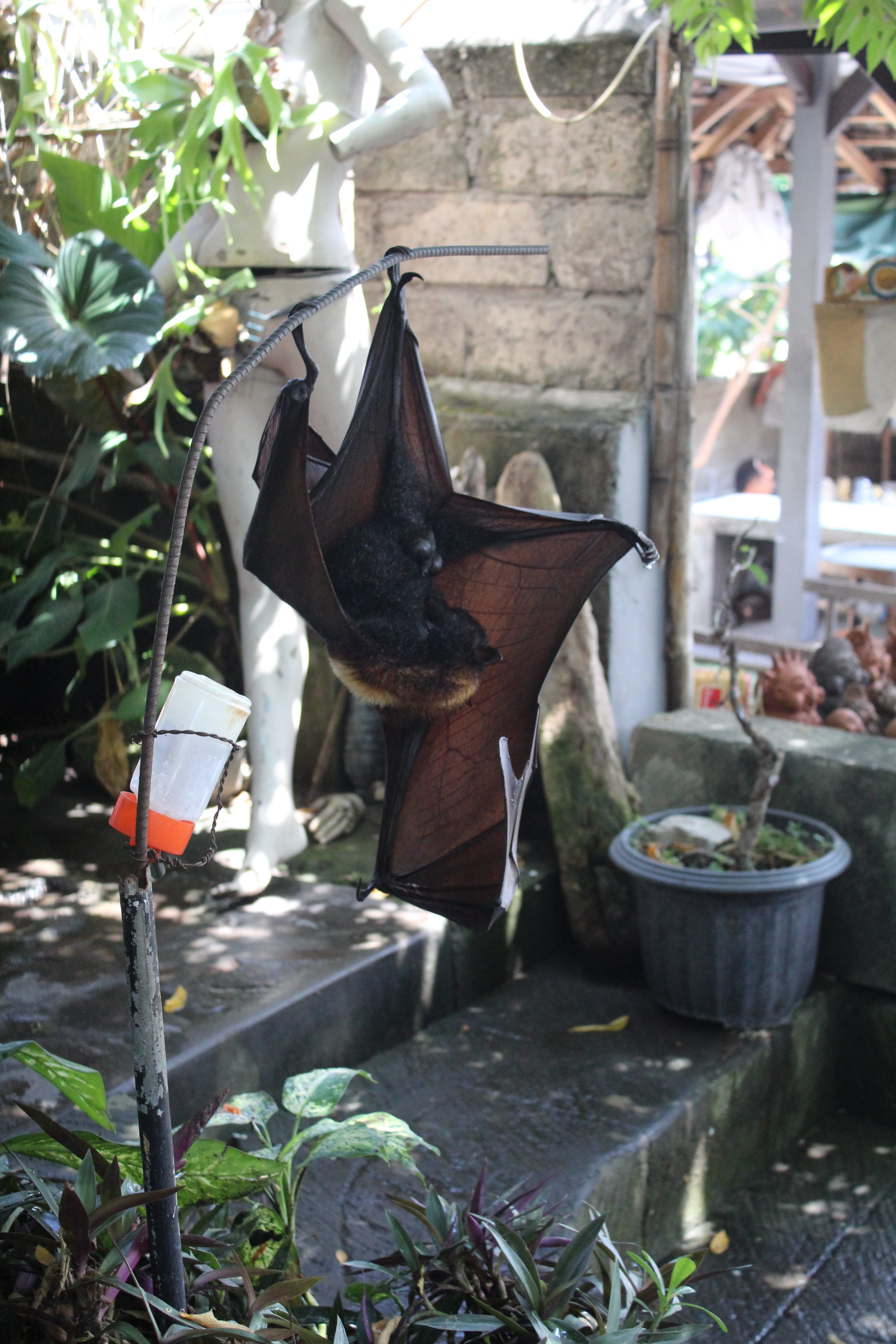 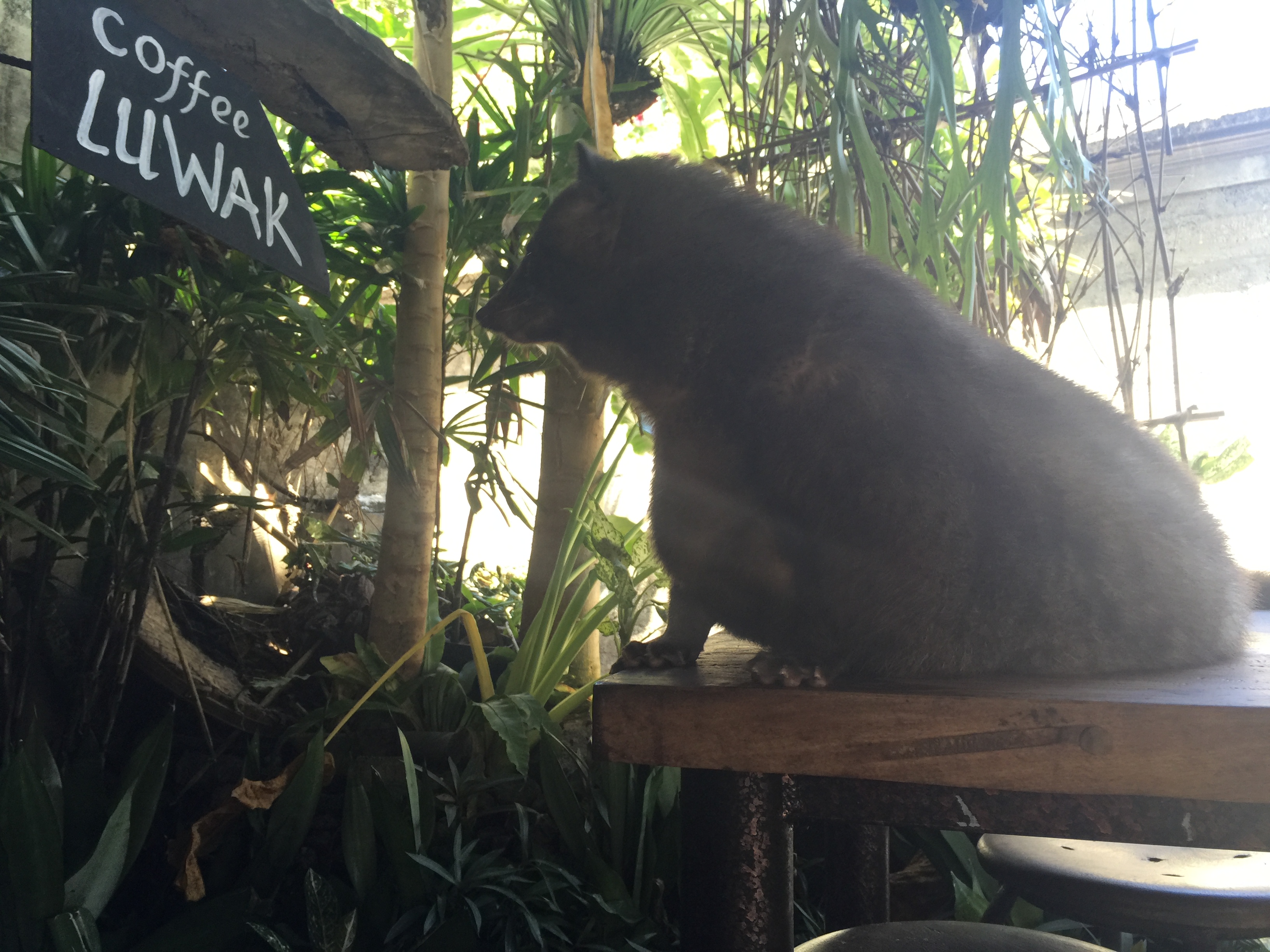 We then set off on another hour n a half a ride through the paddy fields and villages until we arrived at our destination. We left the main road and headed down a little track towards the ocean and drive along parallel to it to reach a little place called Dikaloha House, a white surf house set up a small hill overlooking the ocean! You have to climb some rocky steps to get up to the patio, where we were showed our room by a lad called Abdul. Our room looks out onto the patio and straight out to the ocean! So perfect! It’s very basic, but just right.

There is a shared eating area and kitchen and done chill out seats with a hammock (from which I am writing this blog).

Then we met our fellow housemates, two Aussie lads called Ash And Mike who are in the room next to us. And an Aussie couple with Little baby who have the big room at the top of the house, Guy, Emma & Cedar. There is also a Swiss guy called Matt who has the room that looks like a little beach hut stuck on the side of the house.

As we are quite far from civilisation the boys said that we could borrow their scooter to head up to the shops. So as its not a busy road like Kuta, we drove it up there and bought supplies. On the way back we stopped at a more westernised hotel for some much needed lunch. It is closer to the beach than our place and has a balcony to sit on while you eat.

We headed back to the house n then wandered down the beach to look at the surf. The beach itself is made of black volcanic sand. It’s so beautiful, it sparkles in the sun and is the most fine sand I’ve ever felt! It also wipes off so easily. It’s a long beach which curves around. There are a handful of people about. A man feeding his cows, a few surfers in either direction and a few other people jogging up the other end. But we basically have the whole place to ourselves!!! It’s truly peaceful and exactly what I need.

I decide I need to get in the water, but the boys say that the surf isn’t very good, so I go for a swim instead. The sea is so warm and surprisingly clear, the black sand isn’t like mud, it doesn’t make it murky at all.

Crash explored the beach n when I got out we sat and chilled on some rocks. We made up a game like bouls, where we had to hit a specific rock… crash won. There is absolutely no wifi here and hardly any network coverage either so everyone is forced to talk or make up entertainment! I love it!!!

We sat there for ages and watched the sun go down, it went down so fast and was big and red, casting shadows over the ocean. 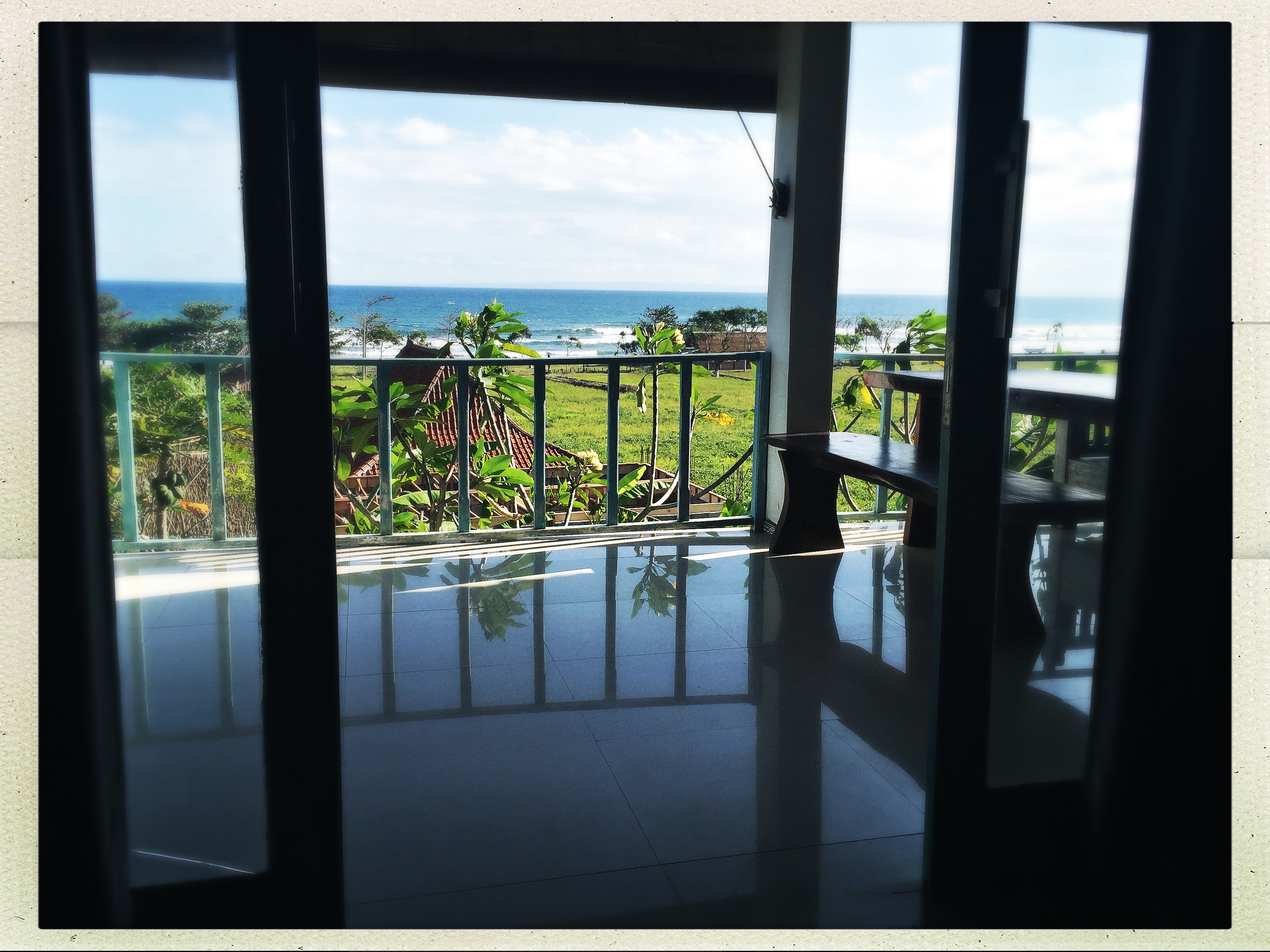 View from our bedroom at Dikaloha 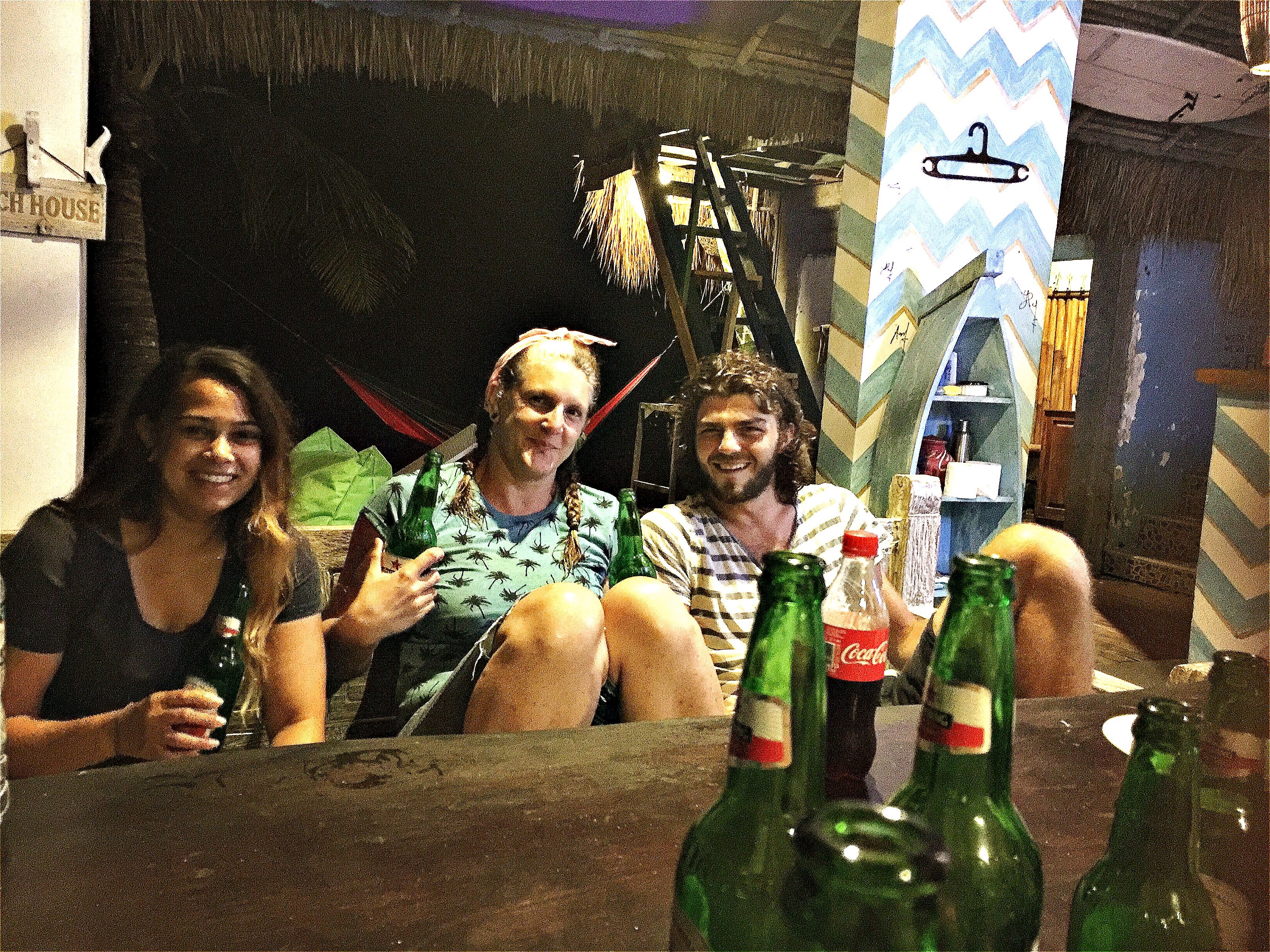 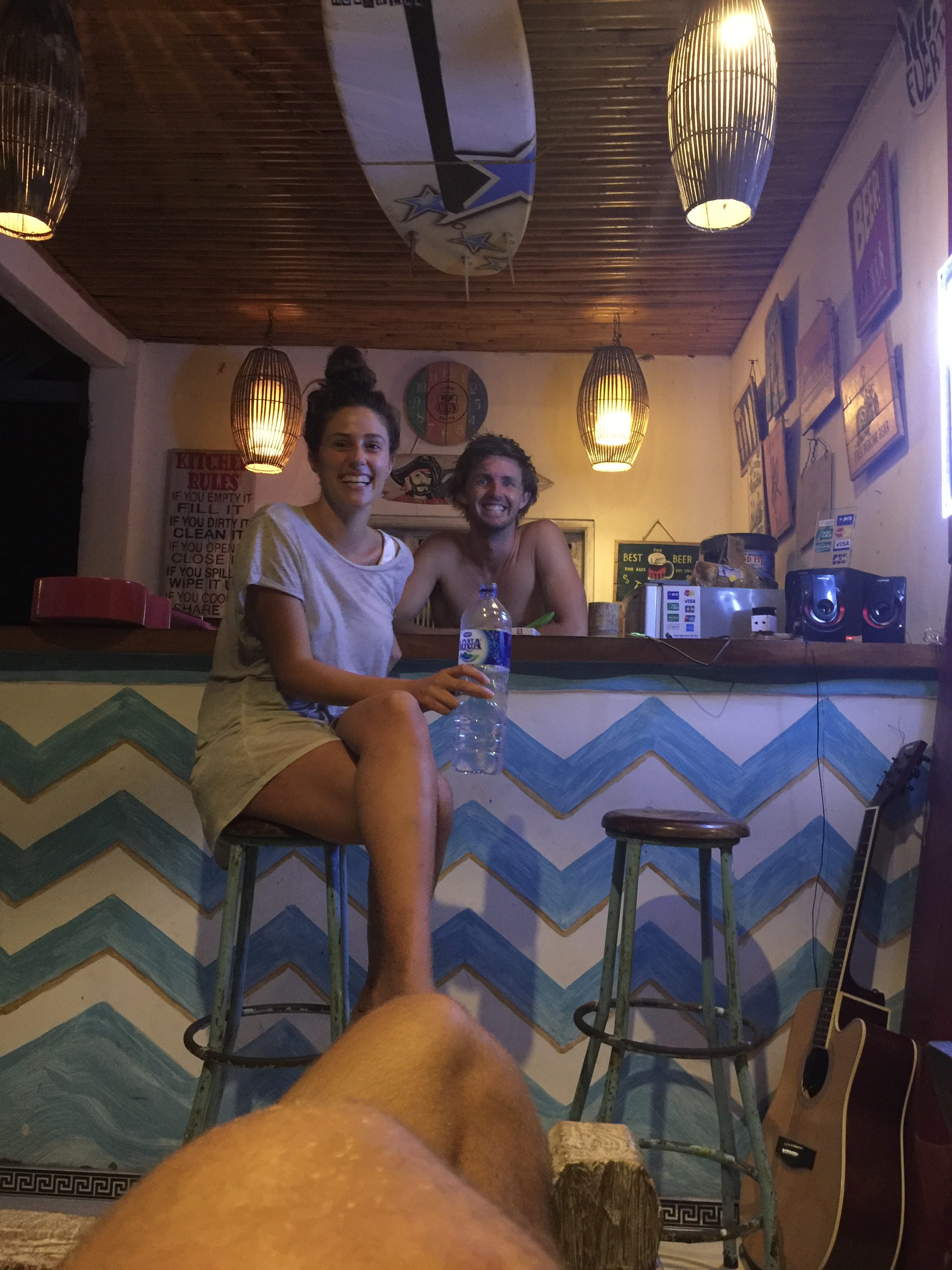 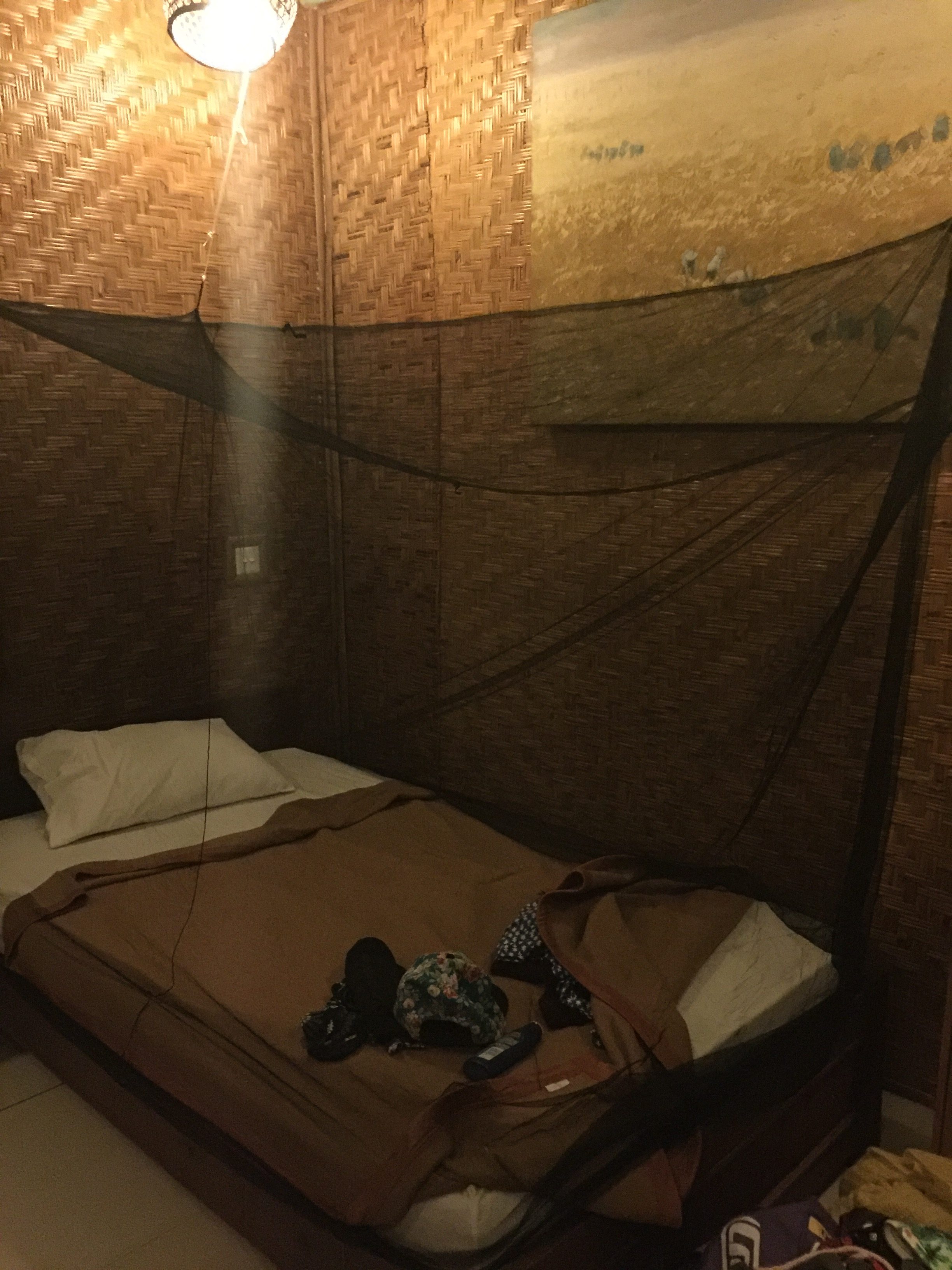 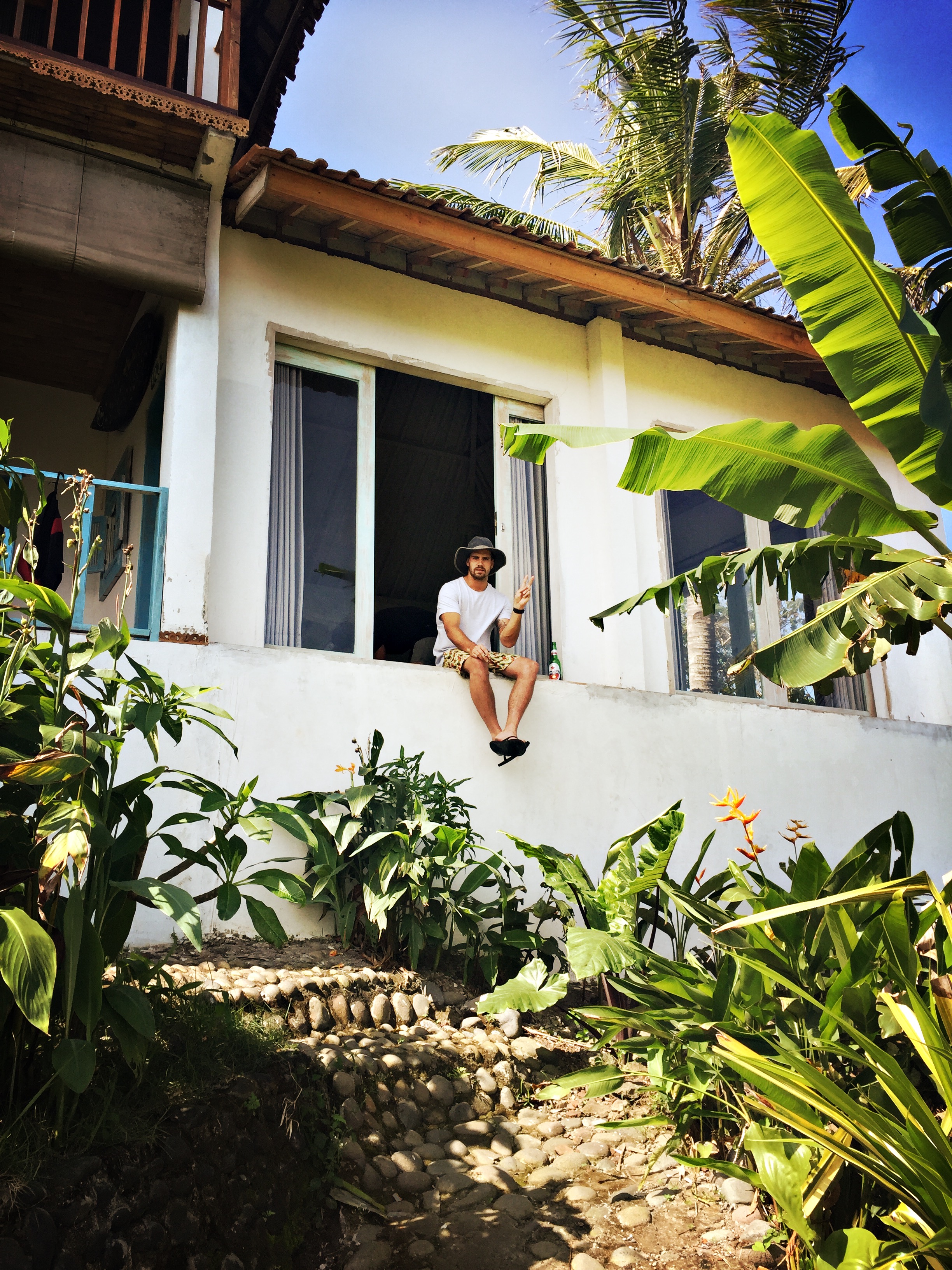 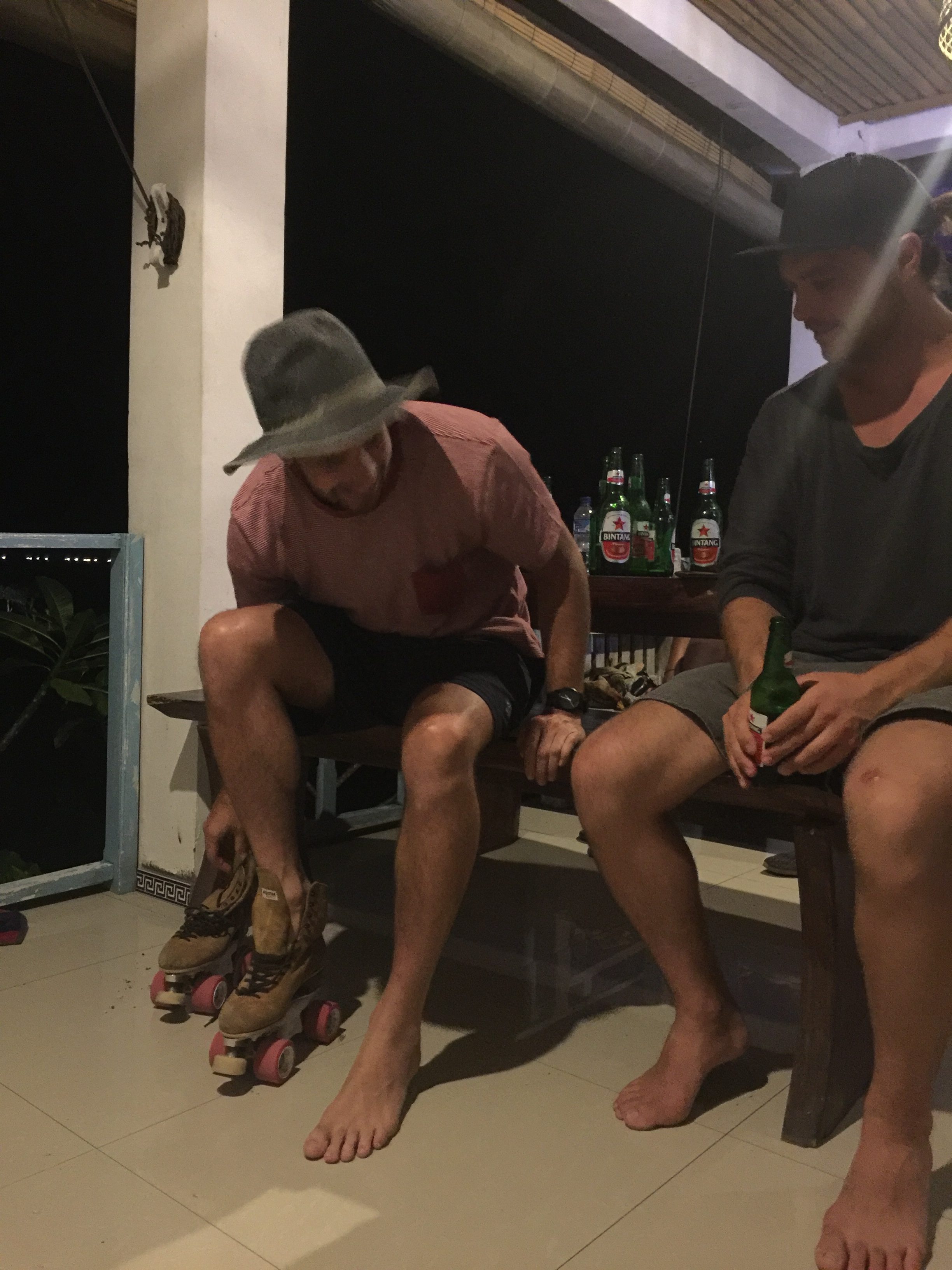 Ash trying on my skates

Back at the house everyone was sitting about and we meet Matt who has been training as a marine biologist on an island near Java. Plus the owner of the house who was laughing with us. When the boys found out that we had our skates with us Ash decided that he wanted to try them on, which was hilarious.

We hung out for a while then we all headed back to the posh hotel for some dinner and drinks. The two Aussie lads are very silly and so we were laughing a lot! It’s so good to meet fellow travellers, there is so much to learn… Like apparently there are ‘drop Bears’ in Australia that just drop out of trees onto you!!?!! Not sure about this fact! Ha ha ha.

We headed back to the house pausing to check out the Milky Way which is very visible here as there are no lights except for the hotel and the house! We followed the boys with their phone torches and I chatted to Matt about his travels.

We hung out for a bit more, watching the bats swoop into the balcony area and the gekkos sneaking out from behind a surfboard in the wall to catch bugs. Then the boys went to bed and me n crash took the opportunity to be peaceful and read a book and write (this blog).